Delighted to be included with Zoë Gingell in this publication from the Live Art Development Agency...
Live Art and Motherhood - a study room guide
researched and written by the artists,activists and academics Emily Underwood-Lee and Lena Šimić.
Posted by Eve Dent at 03:59 No comments:

This blog, a work in progress, is an attempt to bring together material and information about my past work, my ideas and influences and also give some background to my current practice as an artist and my collaboration with Zoë Gingell: The Mothersuckers Project.
Posted by Eve Dent at 08:35 No comments:

"Dent has consistently pushed audiences in their expectations of performance. The subtlety of her work cuts through some of the po-faced bombast of much performance work". Anthony Shapland
Born in London, I studied in Bristol and then in Cardiff, where I have been based for the past 12 years. Since 1999 I have performed widely both in the UK and in Europe. Commissioned work includes 'Good his Labour', performed at the Victoria and Albert Museum, for Architecture Week 2003 and the 'Anchor Series'- site specific improvisations, performed at among others: Anti Festival Finland (2003), Bone6 Switzerland (2003) and for the Baltic in Newcastle (2005). I was also an artist in residence for the Body Limits Season in Lyon (2002) and Dance Encounters, Wales Arts International (2007). I also exhibit prints of my performances, participating in 'Flourish', a group show in the Czech Republic (2005), SPILL in London (2007) and most recently in 2010 showing a film of my work for 'The Fractured Body: The House as Body', an event hosted by Mobile Studio as part of the Surreal House exhibition at the Barbican Art Gallery.
In the past my work has been concerned with the positioning of the body and the blurring of boundaries of subject and object in architectural space, this has led more recently since becoming a mother to exploring the maternal body as site itself. I am currently working with Zoë Gingell, in a joint examination of our experiences of motherhood in relation to the body; the 'Mothersuckers Project'.
I am also a qualified lecturer and have taught at the University of Wales Institute, Cardiff and Gloucestershire University.
Posted by Eve Dent at 03:55 No comments:

My past practice has been based around using my body to create installations that arise out of interactions with architectural structures and spaces. These interactions have manifested as live solo performances and also as a large body of photographic work.

It appears as if all or parts of my body have been fitted into the very fabric of a room or environment. Often my body is almost completely hidden within the recesses or constructed spaces found within a building: for example, the space under a floor or the flue of a chimney, with only part of my body visible, or I am squeezed into holes or gaps in the material structure - my physical contours against those of the architecture.

Through this work I have sought to question our understanding of the body and its environment, so that there appears to be a blurring of boundaries between the subject and the object, between built structures and the live bodily form. The performances “allow for the working of a kind of ‘sympathetic magic’ that ‘grows’ a complex hybrid web between flesh and architecture...this is not a case of symbiosis, there is never a blending between these two bodies that would require a third as a witness, but a continual swerving, borderlinking, oscillation.” (1)

In my most recent body of work, the “anchor series”, 2003-2007, I was commissioned to respond to a building or site in my own unique way; to seek out its hidden and unseen nooks and crannies and bring them to life. To become, in a way, the spirit of the building.

Since 2004, when my daughter was born, I have been producing work less intensely and my voyage into motherhood has informed and inspired me to now undertake a change in direction as an artist.

It is my intention to start a movement based research process, to explore material drawn from my recent home-life. I am particularly interested in how a child relates to and moves within space. I hope to record my past and present observations in various ways, including translations of a child’s movement or actions into my own adult physical language.

In the past, my work has been concerned with the positioning of the body and the blurring of boundaries of subject and object in architectural space, this has led more recently since becoming a mother, to exploring the maternal body as site itself. I am currently working with another visual artist who is also a mother, in a joint examination of our experiences of motherhood in relation to the body: how ones sense of self dislocates /relocates through the bodily experiences of pregnancy and breastfeeding a baby.

This collaboration has developed into the Mothersuckers Project, and 'Breastcups', a piece that combines performance, video and installation. The work plays in a humourous and ironic way with the breast as a container of many meanings; as a dual conduit of connection and separation between Mother and Baby, and extended within a social arena to challenge cultural norms.

“Breasts- like the women who “wear”-them can be deemed as both sexual and maternal.” The maternal body disturbs by accentuating this lack of a clear black or white distinction. “As an act of motherhood that is simultaneously exalted and abhorred, breastfeeding animates this notion of “binary terror”.” (2).

'Within the installation, Breastcups, the maternal body is physically displaced through its table setting, breasts served up as cake and cups on dollies, sitting next to umbilical tubes and feeding paraphernalia, all wrapped up in politeness. As in the videos, the collection of milk, the ever present fluid, acts as a connective currency between the private intimate act of nurture, without the baby's presence and a world of manners, tea-time.' Zoë Gingell.
(1) Kuburović, “Matrixial Traces in Performance: the anchor series”. Parallax, 2009, vol. 15, p.121.
(2) Faedra Chatard Carpenter, '"(L)Activists and Lattes": Breastfeeding Advocacy as Domestic Performance.' Woman and Performance: a journal of feminist theory 16:3 347-367, p. 352-353.
Posted by Eve Dent at 04:10 No comments:

Since 2003 I have been making the 'anchor series'; a series of impromptu interventions tailored uniquely to a building or space that explore the threshold between bodily self and material thing. As I journey around a site, usually unknown to me before I arrive, I attempt to fit my body into the nooks and crannies, holes and cavities that exist within its architecture and the objects found there, using my body as a medium through which to explore the poetic life of a building and the playful encounter that occurs between audience, body and site.
This work has been consistently influenced by ideas of embodiment in relation to environment, in particular Roger Caillois' essay examining insect mimicry: 'Mimicry and Legendary Psychasthenia', which first appeared in the Surrealist journal Minotaure. Caillois proposed that insect mimicry had no survival value and was instead a confusion between an insect and its environment. He linked this behaviour to a kind of spatial psychosis, where the subject feels that their identity no longer resides within the boundary of the body but is lured out into space. 'The feeling of personality, considered as the organism's feeling of distinctness from its surroundings, of the connection between consciousness and a particular point in space, cannot fail under these conditions to be is seriously undermined...'
(Roger Caillois, "Mimicry and Legendary Psychasthenia," translated by John Shepley, in October: the First Decade, 1976-1986, edited by Annette Michelson, Rosalind Krauss, Douglas Crimp, and Joan Copjec (Cambridge, Mass.: MIT Press 1987), p.70. Caillois's essay was first published in Le Mythe at l'homme (Paris: Gallimard, 1938), and in a shortened version in Minotaure a year before.)
The anchor series has also been influenced by my personal discovery of the figure of the anchoress. A medieval female hermit, the anchoress was usually a nun who chose to be shut up for life inside a small room attached to a church. This act of living entombment and incarceration I find both deeply fascinating and disturbing, metaphorically mirroring some of my own artistic concerns: the housing of the body in site; the rite of disappearance and loss; a vision of the sanctity of bricks and mortar, protected, anchored and mediated through a human presence. 'It is for this reason that an anchoress is called an anchoress, and anchored under a church like an anchor under the side of a ship, to hold it, so that the waves and storms do not pitch it over.' (Ancrene Wisse). 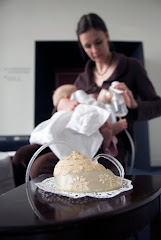 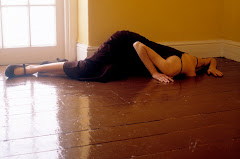 Just Below the Surface 1999 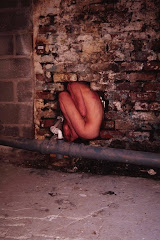 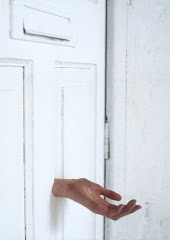 The Fractured Body: The Body as House

2004 Just Below the Surface 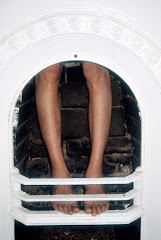 Sense and the City, Architecture Week,

Welcome to the Glassworks,

2000 Just Below the Surface

1999 Just Below the Surface 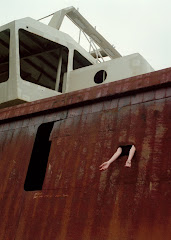 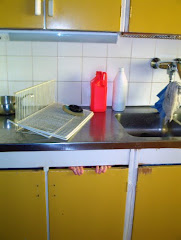 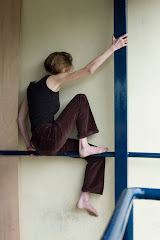